Youth in science: FameLab SA 2017 winner heads to international finals in the UK

As South Africa celebrates Youth Month in June, one of the country’s brightest young minds and the winner of FameLab South Africa 2017, Tshiamo Legoale, is heading to the UK where she’ll represent the country at the FameLab International Final 2017, at the Cheltenham Science Festival from 5-8 June 2017. 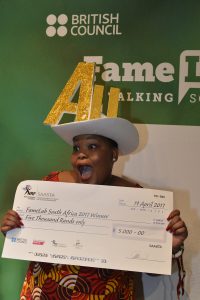 Speaking on Channel Africa’s morning radio show, Africa Rise and Shine, the 27 year old Geologist from Mintek, a global leader in mineral and metallurgical innovation, said that winning the SA title was not just an exciting opportunity for her. “It’s also very humbling that I get to represent South Africa and tell the world that the research being done in this country can actually be at the forefront of the global research being communicated. But it’s also very humbling because it says that the work that I do is found to be relevant and it’s found to be very important to society”.

Tshiamo will be presenting her winning talk on phytomining, which involves growing plants on top of low grade ores. In South Africa, “we have an estimated 17.7 million tons of gold waste. All this gold was mined out previously, but tiny amounts of this gold remains in the dumps,” said Tshiamo who is researching a method of using wheat to harvest gold from these dumps.

The final will take place from 8.30pm-10.30pm UK time, at the Parabola Arts Centre in front of a packed Cheltenham Festival audience. You too can be part of the action as one of the digital audiences who will tune in to the live video streaming via the FameLab International Facebook page: www.facebook.com/FameLabInternational.

You can also follow @zaBritish on Twitter for the latest updates from Tshiamo and keep up with the action by following @FameLab and @CheltSciFest. You can use #FameLab to join the conversation.

A Giant Leap for African Women in Science

This year’s African finals have also been a big win for women in science. The four participating African countries which include Egypt, as well as Mauritius and Uganda who both held their inaugural FameLab competitions, are all sending young female scientists to the international finals. “FameLab 2017 in Africa as a whole has been quite exciting. Through role models such as Tshiamo, Irene Kyomuhangi from Uganda, Roshnee Rakomar from Mauritius, and Yasmine Samir from Egypt, we hope to inspire other young female scientists, and have other young people see that science is possible, it’s accessible and it’s exciting,” said FameLab SA Project Manager, Moagisi Sibanda.

The international final will take place on 8 June 2017 in Cheltenham, with 31 young science communicators from across the globe competing for the title, the largest number of countries participating to date. The judges will include Ellen Stofan (former Chief Scientist at NASA), Jim Al-Khalili (theoretical physicist, author and broadcaster) and Tim Slingsby (Director of Skills and Education at Lloyd’s Register Foundation) and the event will be hosted by the BBC’s Quentin Cooper. Each contestant will deliver a three-minute presentation on their chosen topic. Every presentation will be judged according to the golden rule of the 3 Cs: content, clarity and charisma.

Institutions or organisations involved in science, technology, engineering, mathematics and innovation (STEMI) research, are invited to submit an expression of interest to host a heat for the 2018 competition cycle. Heats can be used to showcase your science and technology research within your organisation as well as an opportunity to build organisational capacity in science communication, through the training offered by FameLab SA partner, Jive Media Africa.