You are here: Home / Media Room / SAASTA In The News / FameLab SA Finalists to Compete in Cape Town

Ten finalists will compete at the national finals for the coveted title, ‘South Africa’s Pop Idol of Science’, at the Going Global Conference in Cape Town on 4 May 2016.

The 10 finalists were selected from nineteen top young science communicators across the country at the FameLab South Africa semi-finals on Saturday 12 March at Sci-Bono Discovery Centre.

“The FameLab semi-finalists were brilliant and they delivered top class talks. Our judges had a tough time in selecting the 10 finalists,” said Science Communications Manager at the South African Agency for Science and Technology Advancement, Mr Michael Ellis.

“At SAASTA our focus is not only on the ultimate National FameLab winner but we believe that all of the participants benefit greatly from the competition. They gain valuable science communication skills which they will use throughout their scientific careers,” added Mr Ellis.

The 19 semi-finalists, selected at seven regional heats across the country, were brought to Gauteng ahead of the semi-finals for a two-day science communication masterclass, hosted by the British Council. Head FameLab international trainer, Malcolm Love from the United Kingdom, shared his knowledge and experience on best practises to follow when talking about your science.

The impact of the masterclass was evident in the quality of the presentations that were heard at the semi-finals, creating a difficult decision for the judges to select only 10 participants to go through to the finals.

The format of the FameLab competition requires participants to present a scientific topic or concept to a panel of expert judges in a time of no more than three minutes. Talks are judged on content, clarity and charisma. The challenge is that talks should be accurate and informative but also entertaining and original, all while making sure the public audience understands.

This comes at a time when the importance of public engagement and discourse in science and technology is better recognised, as evidenced by the Department of Science and Technology’s Science Engagement Strategy. Science should serve society and can only do so if the public is able to engage with it. Unfortunately, scientific concepts and findings are not always communicated effectively to the public. This is what FameLab strives to address.

FameLab is an international competition and training programme designed to inspire, motivate and develop young scientists and engineers to actively engage with the public. With over 30 participating countries, worldwide, it has been dubbed the ‘Pop Idols of Science’! The South African winner will go on to compete against their peers on an international stage at The Times Cheltenham Science Festival in the UK in June 2016.

The ten passionate young scientists selected to participate in the national finals are:

FameLab in South Africa is made possible by a partnership between the British Council, the South African Agency for Science and Technology Advancement and Jive Media Africa. 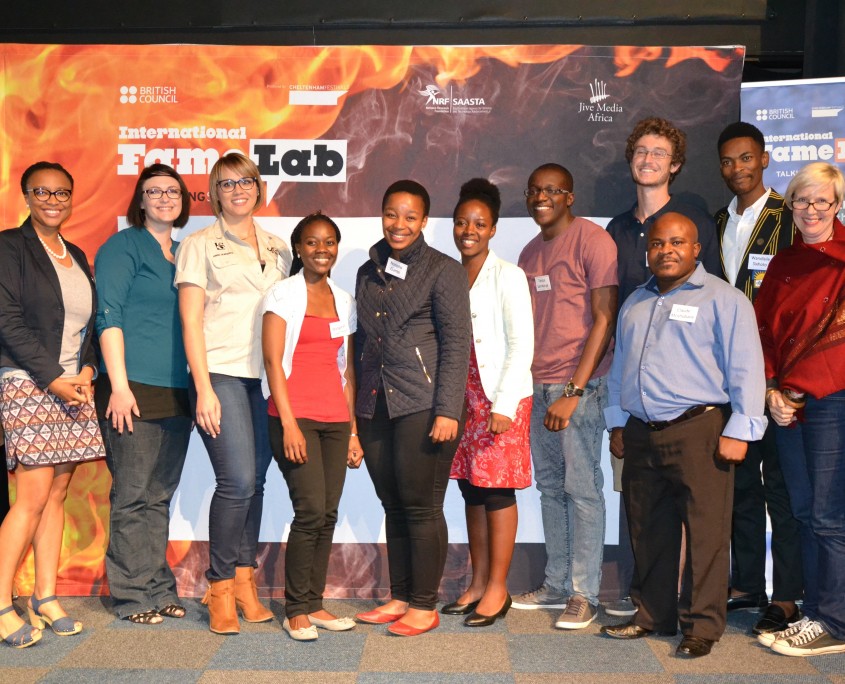