Pumeza Zaza Mabusela was born and bred in uMzimkhulu, Kwazulu Natal. She was raised by her grandparents in the dusty streets of a beautifully built village called Rhalodi. After matric, she relocated to East London, where she is currently based, but regards uMzimkhulu as the home where her heart is.

Pumeza studied at Rhodes University where she completed a Bachelor of Journalism and Media Studies degree and a Masters Degree (in African Language Studies). As part of her student volunteer work; Pumeza has worked for two community radio stations in Grahamstown, namely Rhodes Music Radio (RMR) and Radio Grahamstown. This is where her love for radio was natured. She believes that community media is important as it serves as an important link between communities and the government.

Pumeza is currently involved in an internship  programme with the South African Agency for Science and Technology Advancement (SAASTA). As part of the internship, she has been placed in the Amathole District Municipality where she works for a community radio station, Kumkani FM (95.8FM) in East London.

In addition to the science journalism work that she is required to do as part of her internship at Kumkani FM, Pumeza also works as a presenter and hosts her own two-hour show known as The Sunday Evening Talk, a show which discusses science and technology related matters. She also assists in news presenting and co-hosts the station’s afternoon drive, The Hustler’s Drive Time.

Her motto is: “I believe in the beauty of my dreams, I am going higher and I am a step ahead of anything” 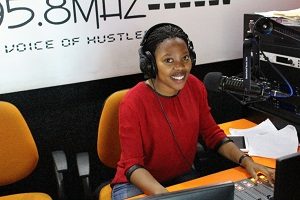