The IPRDP is intended to gather knowledge, evidence, and learning for integrating innovative technologies in improving access and quality of public service delivery. She is involved in reporting on and raising awareness of a technology called Corrective Action Request Report System (CARRS Project), which is being implemented and which is impacting the local community in the Moretele local municipality. She also produces science and technology articles intended to improve awareness of the role of science and technology in society. She produces general news and feature stories for the community media host and conducts interviews.

Through her love of writing, communicating and potential to inspire change, Ntsakisi found a dream opportunity with the Department of Correctional Services as a communication intern in 2013, after graduating from the University of Venda in Limpopo with a BA in international relations and moving to the North West Province (Rustenburg) from Limpopo (Giyani). 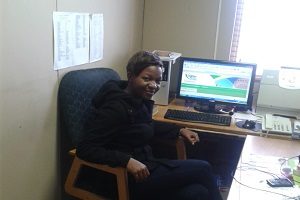